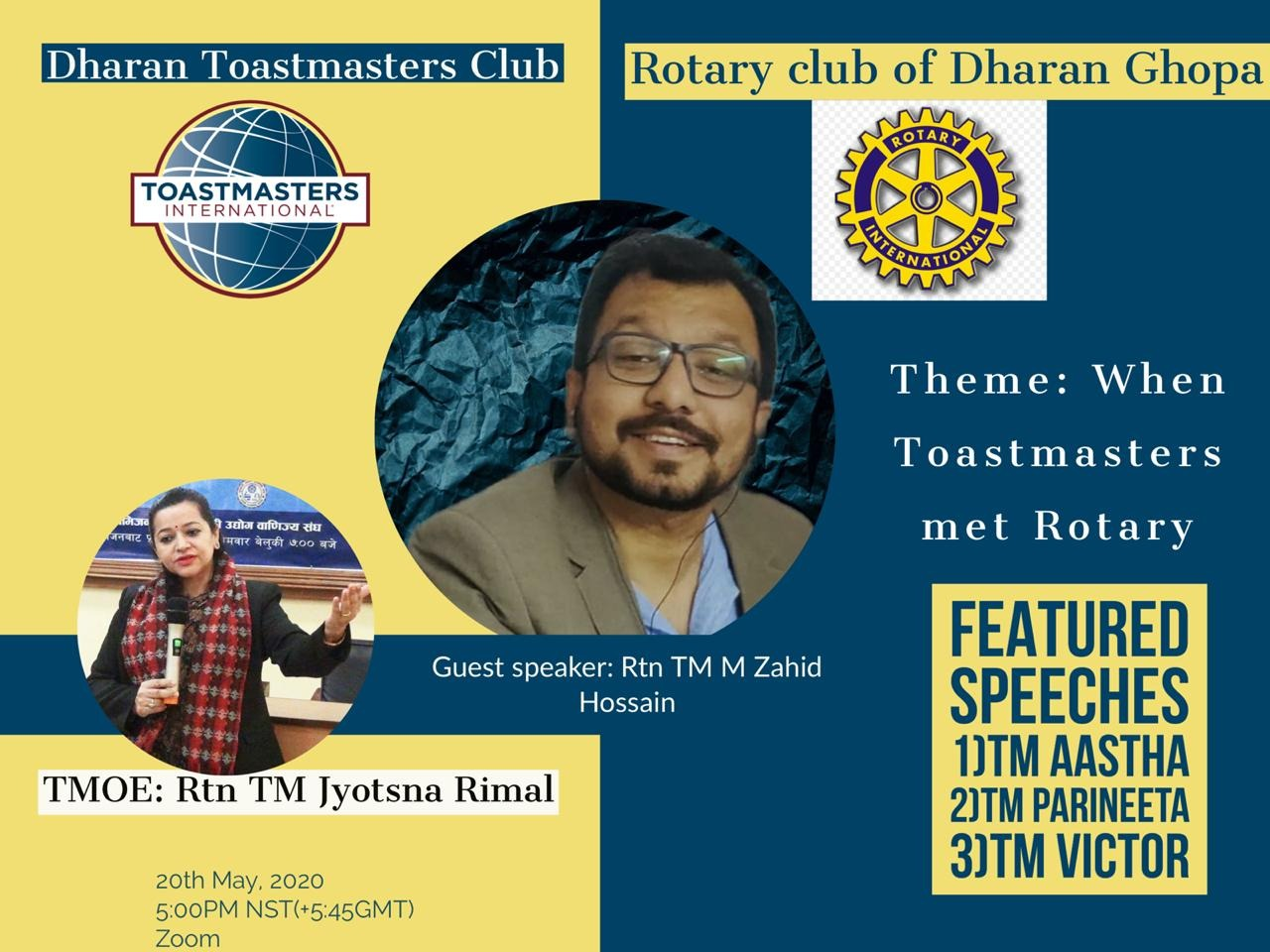 The first joint virtual meeting of Dharan Toastmasters Club and Rotary Club of Dharan Ghopa was held on 20th May 2020 at 5 pm. We must say, the meeting was thoroughly enjoyed by Rotarians, Rotaractors, Toastmasters and guests. The Rotary-Toastmaster partnership is symbiotic. The world-respected leadership and public speaking toolkit developed by Toastmasters is an asset to Rotarians, Rotaractors and Interactors to enhance their communication abilities with positive impact on leadership, service and professional skill sets. Hearing this from the Rotarians was delighting. In turn, Toastmasters are welcome to undertake community service with members of the Rotary family.

The meeting was started by the Sergeant-at-Arms, TM Sundhya Vashisht, who also fulfilled the double duty of being an evaluator brilliantly. The President of Rotary Club of Dharan Ghopa and Vice-president Education of Dharan Toastmasters Club, TM/Rtn Ashish Shrestha presided the meeting. The words from our Division Director DTM Suman Shakya were awe-inspiring as always. The District Governor, Rtn Kiran Lal Shrestha inspired us with his understanding of our togetherness and encouraged us to continue the good work of humanity and self-development. The guest speaker, TM/Rtn Mohammad Zahid Hossain, from Bangladesh, took us on a round trip from Rotary to Toastmasters in his prodigious speech.

In the meeting, toastmasters showcased their public speaking skills through featured speeches. There was a standing ovation for an Icebreaker speech by TM Aastha Pathak, TM Victor Joseph brought laurels to himself with his L1P3 speech, and the attendants were amused by TM Parineeta Thapa’s L2P1 speech. The Table Topic Master, TM/Rtn Saurav Agrawal, enthralled us all with amazing queries for breathtaking Table Topics. This sessions’ speakers captivated us by expressing their views on the topics. Similarly, kudos to the evaluators TM Sundhya Vashisht, TM Bijaya Mishra, and TM Sindhu Khatiwada, who fulfilled their roles with their heart and soul. The indirect evaluators also need a special mention; as this was a combined meeting, they were paired, one Toastmaster and one Rotarian- the grammarians: TM Aayusha Gupta and Rtn Ashish Shrestha, the aha counter: TM Deepak Poudel, the timer: TM Rita Khadka, and the ballot counters: TM Rahul Reddy and Rtn Santosh Agrawal. The tech masters- Dr Naresh Joshi, TM Agrim Khetan and Rtr Suraj Shah- did a great job by meticulously concentrating on the smooth flow of the meeting. A special mention to TM Ankit Goenka, our Area Director, for the overall arrangement of the meeting. The meeting ended at 7:00 pm followed by an informal session.