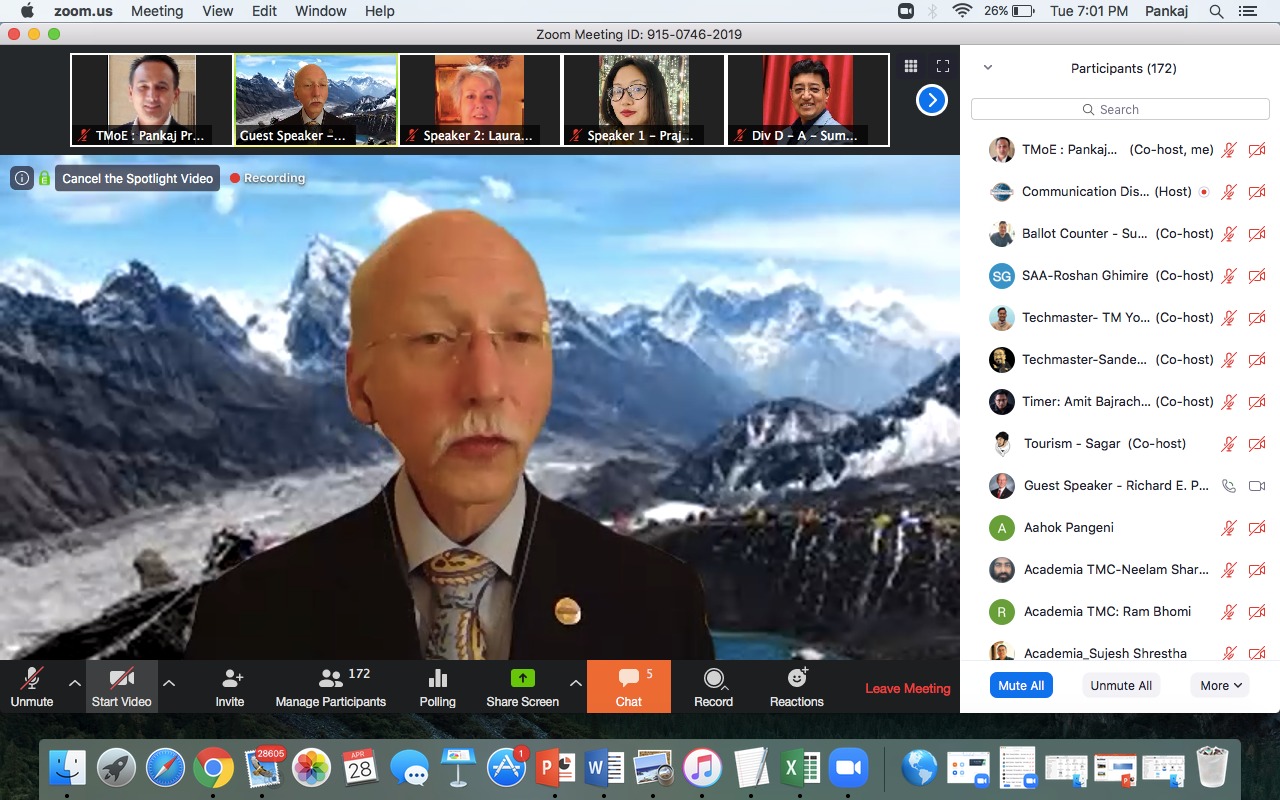 A Global Meeting of Toastmasters

A global meeting of Toastmasters was successfully hosted by Nepal on the 28th of April. There were participants from 12 countries with 173 participants, it truly became an important MICE event while the lockdown was still on.

With the most common platform available, it was indeed a virtual meeting over zoom with the keynote speech by Toastmasters International President Elect 2020-21, Richard E. Peck, DTM who attended the meeting from USA. With the speakers and other technical role players from Canada, India, Mauritius, and Nepal, this meeting hosted by Area A6 led by Tourism Toastmasters club.

Richard Peck, DTM had a virtual background of Mt. Everest to show solidarity with Toastmasters in the Himalayan region. He is yet to visit Nepal and the virtual meeting gave him one more reason to travel to Nepal when the world is back to normalcy after the pandemic.

“A leader is not the center of attraction. But he should be the epicenter of action” – Richard Peck . This powerful quote becomes the key takeaway for the participants. This was an apt message in the present challenges of COVID.

Laura Chambers, DTM from Calgary – Canada, and Prajwol Sayami from Nepal delivered prepared speech as per their Toastmasters manual. The General evaluation was led by Sandeep Raturi, DTM (District 41 Director 2018-19) who is also an inbound tour operator based in Delhi. His team of evaluators was from Mauritius and Nepal respectively (Binesh Bheekhoo and Moon Pradhan, DTM). Table Topic session was conducted by Avish Acharya.

Kathmandu based Tourism Toastmasters club was chartered in 2018 in order to share the goodness of effective communication and leadership among Tourism professionals and entrepreneurs in Nepal. The club leads by example promoting Responsible Tourism practices in Destination Nepal.

The global meeting was a success not only in bringing 173 participants from 12 countries, it instilled hope, fostered camaraderie, and fueled much-needed resilience. Needless to say, the global meeting of Toastmasters was instrumental in giving visibility to Destination Nepal among 3,50,000 + community of Toastmasters spread in 143 countries.  It also gave away a powerful message to the world that  Tourism is not just a business, it connects the world and boosts the immunity of the global economy.