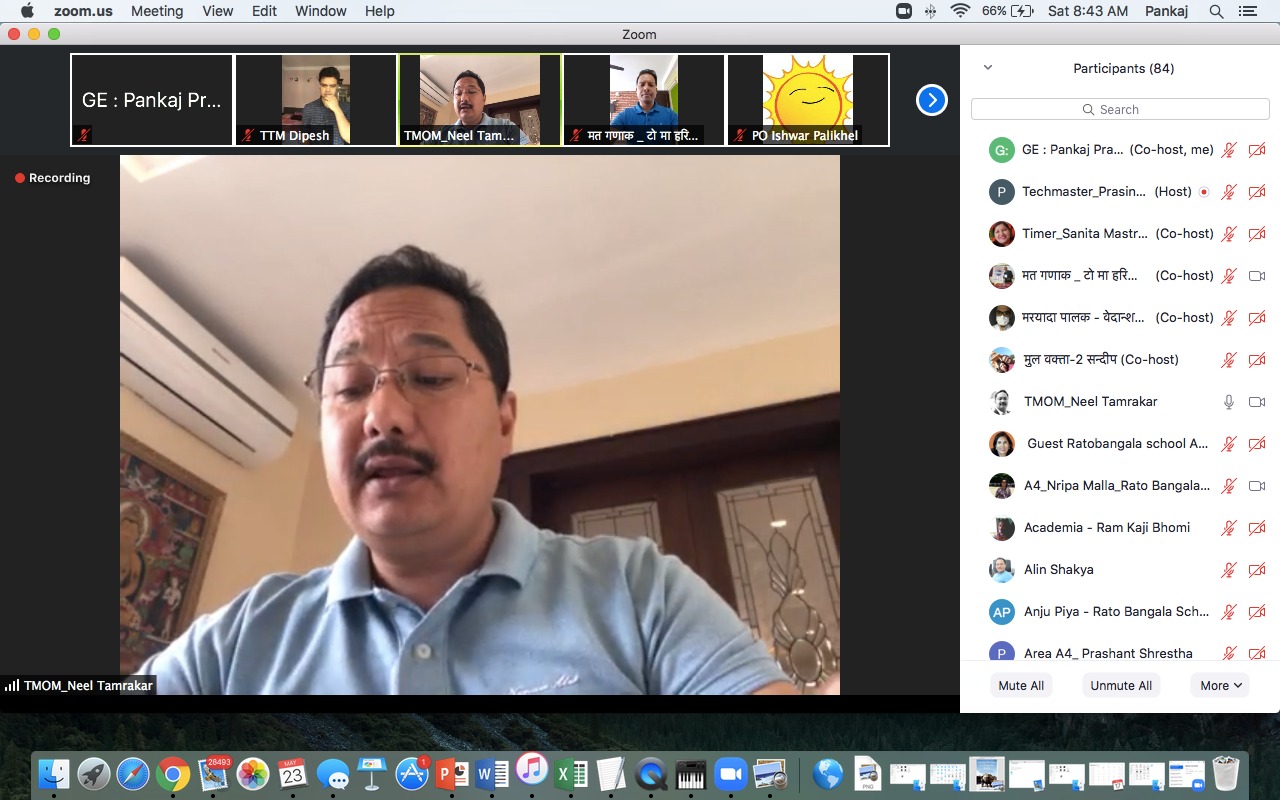 A History in Making

The 37th Club Meeting was scheduled for Bhaktapur Toastmasters Club on 23rd May 2020 at its regular time, 8:30 am. Due to the prevailing COVID-19 situation and the lockdown, we were preparing our meeting on Zoom with the support from the District and Division Officers.

We had already started letting participants in by 8:00 am. By the time we started our meeting at 8:30, we already had over 65 participants from over 18 different clubs. The meeting proceeded precisely the way any of our Toastmasters Club Meetings would, and rang the notification, ‘Ping’. Someone had just sent a message to our group.

“I cannot get in. It says you have exceeded the limit of 100 participants.”

That was DTM Moon Pradhan. The very next moment, Division Director, DTM Suman Shakya informed in the group that someone just left the meeting for some reason and she could come in. And so did she. It was the sign of how spectacularly memorable this meeting was going to be.

I had specially requested DTM Bhanu Dabadi for his presence in this Historic Meeting, where we had District 41 CGD DTM Ranjit Acharya as one of the featured speakers and Division Director DTM Suman Shakya as his speech evaluator. Despite his pre-scheduled engagements, he had assured me that he would join as soon as he was done with his business. I was 100% sure that he had entered. But to my utter dismay, I came to know in the afternoon that he could not, because he was not allowed in. The limit of 100 participants had long been filled. Many more reported and unreported Toastmasters and guests could not join the Historic Meeting for the same reason.

The predicament was sad on one one hand but equally astounding on the other. Had it been our usual Club Meeting, the Zoom meeting platform with a limit of 100 participants would have been more than sufficient. But, this indeed was a special meeting. We dared to conduct the meeting entirely in the Nepali language for the first time in our Club. The overwhelming response reflected the desire of the Toastmasters fraternity in our Division for meetings to be held in our national language. Effective communication in the Nepali language is of equal importance to most of our fellow Toastmasters, and this meeting had proved it.

It’s not that other Clubs had not conducted meetings in the Nepali language before, but the meeting we had, we believe, has struck a different but a right chord –‘ PING’ — sending out a message to the leaders of our Division, a message that we can open the door to greater opportunities for our community and the Toastmasters to expand if our language could be registered among the other official languages at Toastmasters International. We believe our meeting, to some extent, has managed to pave our way towards achieving that goal.