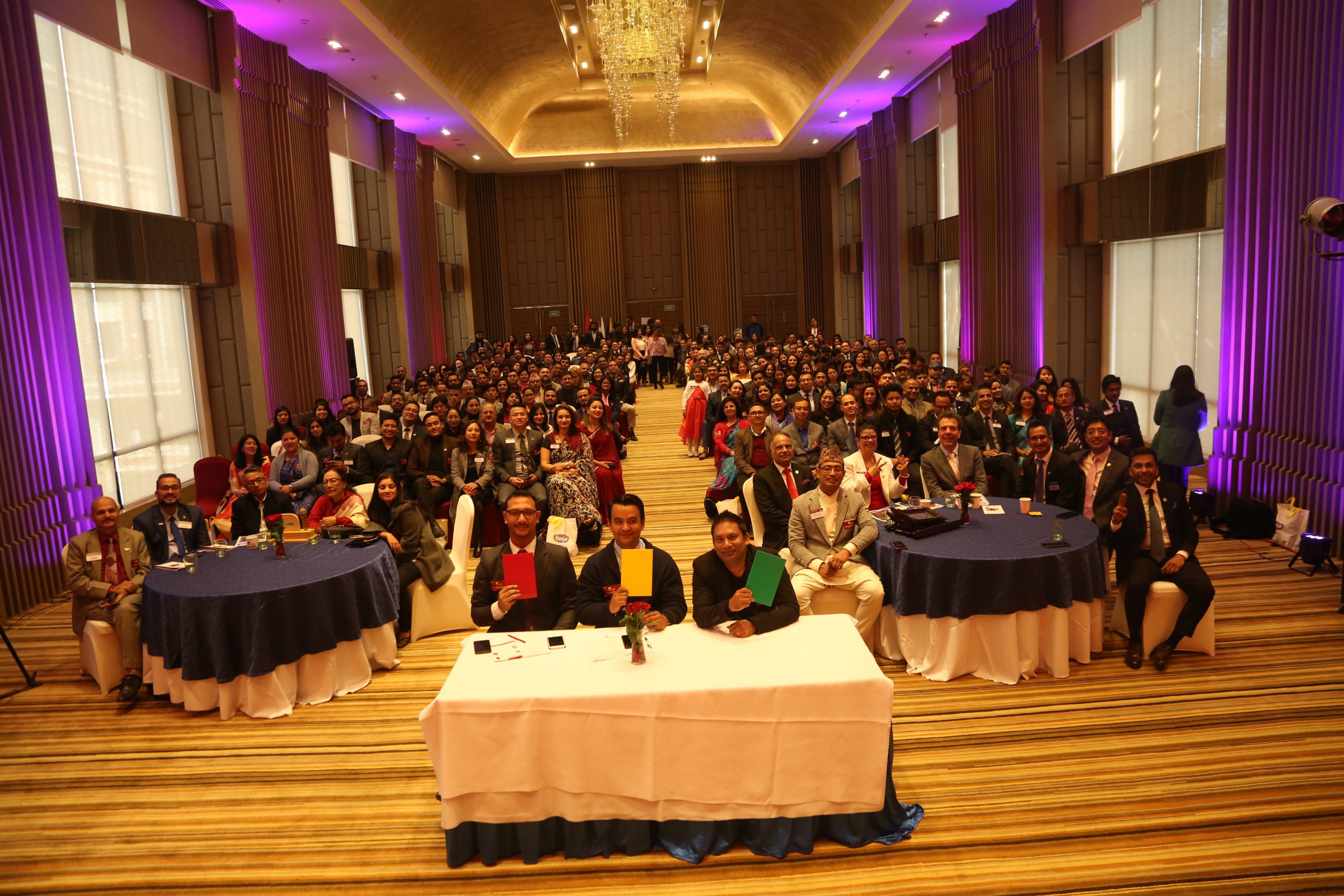 7th December 2019, Aloft, Thamel: Citation 2019 kicked off with a warm welcome address by hosts Brijendra Joshi and Pranu Singh looking dapper and elegant in their traditional wear. Their booming voices echoed through the conference hall, allowing each person to absorb fragments of their enthusiasm. They both introduced a lively traditional style dance performed by the talented members of Rato Bangala Toastmasters.

Following this, a majestic flag march was held showcasing division A. The sheer scale of members in this march had shown just how much the division has expanded and progressed in a short time. Led first by the Division Council and then the Area directors with each respective club Presidents followed by District Officers, Division A Director Suman Shakya, DTM and District 41 Club Growth Director Ranjit Acharya, DTM. To round off this flag march we had honored guests District 41 Director Jennifer Ghosh, DTM and International President Deepak Menon, DTM.

Next, with representative members on the stage, Toastmasters and guests stood up to the Indian and Nepali national anthem. Then the panas lighting ceremony started. It was now official, Citation 2019 had commenced!

The first speeches of the day from Ranjit Acharya, DTM and Suman Shakya, DTM were given, both of which engrossed the audience due to their creative storytelling and valuable snippets of wisdom. During this, there was an elated moment for Toastmasters in Nepal as it was announced there were currently 29 clubs. Not just that, we were now the biggest division in District 41!

District Director Jennifer Ghosh, DTM shortly followed on the stage with a beaming smile greeting us all and warming us up for the day ahead. Her tone, stage presence, and enthusiasm bounced from one person to the next. She shared many stories about her

experience and proved an inspiration for us all on how to bounce back achieving her position as a District Director.

We also had His Excellency Francois Xavier Leger, the French Ambassador to Nepal among our esteemed guests who provided an extremely insightful speech about his career in Nepal, and how he first began public speaking due to his job requirements and how fearful he was.

Topping this was International President Deepak Menon, DTM providing insight into his experience of Toastmasters in India and where it is today along with his wishes for Nepal to have multiple Divisions!

After the opening speeches, it was time for the Communicator Award selected by the jury. In the jury were Gunaraj Luitel, Editor of Nagarik, Prakash Rimal, Editor of The Himalayan

360. This was the second time it had been awarded. We watched a short introduction and then became acquainted with the marvelous and inspirational Krishna Tamrakar, the voice of Radio Nepal. We learned that this loyal lady stood up not only against cancer herself but also runs “Asha” a radio program for cancer awareness at age 82! Tamrakar had spent 31 years reading the news for Radio Nepal. She was handed over the award by International President Menon.

To bring it back to Toastmasters, Alfa M Shakya, Editor of Division A, was welcomed on stage to present the second issue of Division A’s Inkspire newsletter. The multitalented editor then gave an introduction about the newsletter, a brief insight and announced its launch. This edition of the newsletter had a whopping 30 contributors. She then invited Suman Shakya, DTM, Ranjit Acharya, DTM, Jennifer Ghosh, DTM and Deepak Menon, DTM on the stage for the official launch and presented them with the hard copies. She announced it was officially live to view on our mobiles! Then all the contributors were invited on stage for a group photo.

Shortly after, the tea break was announced.

The Speech Evaluation Contest was chaired by Heema Mukarung. She began the contest with a thoughtful quote, read out the rules, and went on to invite the test speaker, Seema Golcha. Her speech title was “ Do you have a sense of humor?” With an intriguing topic, the audience waited for her speech as the contestants geared up with their pens and papers to jot down their observations. The Chief Judge for the contest was Jennifer Ghosh, DTM. There were six contestants from each Area having reached the Division finals after battling club level and area level contests. The test speaker came in and enthrall the audience with her sense of humor. After her speech, the contestants were taken to a separate room. As  we waited for the contestants, Contest Chair Mukarung asked a few audiences to share their Toastmasters experience. After the brief session, each contestant walked onto the

stage and presented their evaluation. The neck-to-neck contest showed how well the Division in Nepal had progressed. After the contest, all the contestants were invited on stage for a brief question and answer session and were awarded the Certificate of Participation by the Contest Chair.

After the Speech Evaluation Contest, a panel discussion on the theme ‘Leadership Through Communication’ was moderated by Area A1 Director Moon Pradhan, DTM. On the panel were Deepak Menon, DTM, Jennifer Ghosh, DTM, Ranjit Acharya, DTM and Suman Shakya, DTM. Each of the panelists elaborated on their personal and professional insights on leadership and communication. Menon was also asked to share his International vision for the organization to which he replied, ‘Our goal is to be the first choice provider of communication and leadership.’

This Panel Discussion was telecasted on Business Plus TV as the 4th Episode of the Leadership Through Communication program.

After the panel discussion session, the second category of contests was the Humorous Speech Contest chaired by Anup Shrestha who began with high energy, read the rules, and prepared the contestants. The Chief Judge for the Contest was Jennifer Ghosh, DTM. There were six contestants from each Area in the Division Finals battling out to be the Division Champion. As the contest rolled on, the audience was thrown into a laughing ball. It sounded like a thunderbolt inside the hall as though something unusual was happening.

After the contest was over, all the contestants were invited on stage for a brief  question

and answer session where Contest Chair Shrestha asked some quirky questions that added more flare into the humorous session. All the contestants were awarded the certificate of appreciation by the Contest Chair.

As the sun started setting, getting gently darker in the fine winter evening, the energy and the enthusiasm of Toastmasters reached a different level with more to expect in Toastmasters got talent, award ceremony, and the closing.

Asira Khanal and Jyotsana Rimal led the session after the second break where Khanal and several toastmasters energized the audience with Queen’s anthem tweaked to “We are, We are Division A”. The audience got along stomping their feet and hyping the performers to match the energy.

The Best Executive Committee Photograph Contest was led by Division Mentor Anish Dixit. A series of photographs of Executive Committee Members of several clubs were showcased. Division A Director Suman Shakya, DTM revealed the winner – Laxmi Bank Toastmasters Club, as the entire excomm members were called up on stage for the award.

Then came the most awaited moment for the Outstanding Member of this tenure awarded to Area A5 Director Avish Acharya. Acharya was probably the first to double his base clubs by adding 3 new clubs to his Area. He was felicitated by District 41 Club Growth Director Ranjit Acharya, DTM. In his acceptance speech, Acharya credited his team behind his success and how he believes the essence of Toastmasters journey to be a collective effort.

The marvelous Citation 2019 gathered all toastmasters Nepal meet on the august visit of Toastmasters International President and District Director aiming to carry forward the Toastmasters movement. The wait for Citation 2020 is on.

Published in Inkspire Issue 3. Click here for the full newsletter.