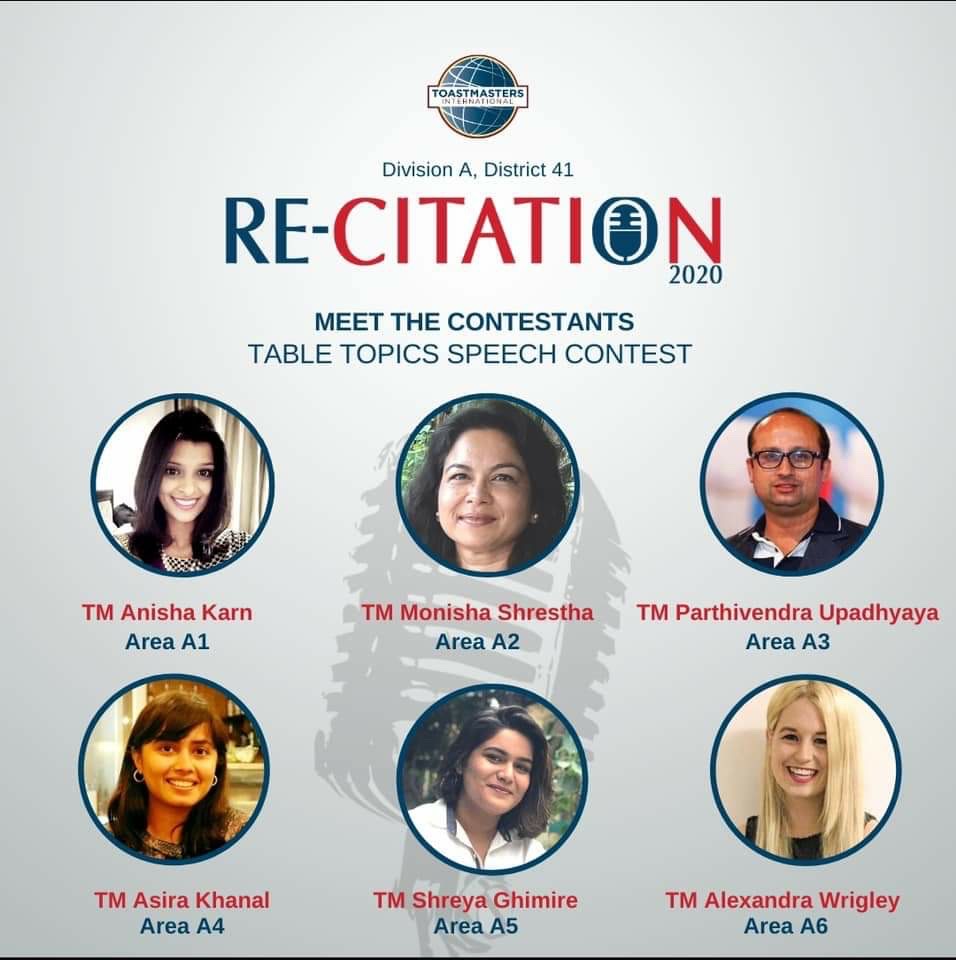 One of the most awaited and exciting events of the year is Re-citation. On 2nd May 2020, we had the first-ever virtual Re-Citation. Despite the world pandemic, Re-Citation 2020 concluded with zeal and enthusiasm. It was successfully and smoothly organized by Area A4 with the support of the entire Division A fraternity. The solidarity of each and every member made it possible to turn this crisis into an opportunity.

On this event, all the 6 areas from Division A came together for the International Speech Contest and Table Topic Contest. Due to the current unfavorable circumstance to conduct the event physically, a virtual platform was set up, attended by more than 270 attendees. It was really mesmerizing to witness an event in a platform that felt no lesser than a physical one.

Re-Citation had the perfect blend of learning and entertainment which glued all the audiences to the event. It was started by SAA TM Soni Rai from Standard Chartered Bank Nepal Toastmasters Club who welcomed everyone, briefed the contest ground rules, and handed the floor over to the charming Master of Ceremonies, Area A4 Director TM Prashant Shrestha and TM Devena Singh from Rato Bangla Toastmasters Club. We also had the privilege to have District 41 PQD TM Nimish Joseph as the Chief Judge of ISC and District 41 CGD DTM Ranjit Acharya as Chief Judge for Table Topics Contest. We had a power talk with District 41 Director DTM Jennifer Ghosh. The Table Topics Contest and the ISC had TM Jenny Manandhar from Rato Bangla Toastmaster Club and TM Prashamsa Rijal from Himalaya Toastmasters Club as the Contest Chairs respectively.

First, we had the International Speech Contest in which the contestants were: TM Kausalya Devi Khadka from Area A4, TM Prajwol Sayami from Area A6, TM Mani Bhadra Pokhrel from Area A1, TM Rahul Chokani from Area A2, TM Alfa M. Shakya from Area A5 and TM Sija Tripathee from Area A3. Likewise, the participants of table topic contests were: TM Alexandra Wrigley from Area A6, TM Parthivendra Upadhyaya from Area A3, TM Monisha Shrestha from Area A2, TM Shreya Ghimire from Area A5, TM Asira Khanal from Area A4 and TM Anisha Karn from Area A1. All the contestants gave their best and amazed us all with their speeches. TM Alfa M. Shakya, TM Prajwol Sayami, and TM Mani Bhadra Pokhrel secured the Winning, 1st Runner Up and 2nd Runner Up positions in the ISC. For Table Topics, TM Asira Khanal secured her position as the Winner, TM Alexandra Wrigley as 1st Runner Up and TM Monisha Shrestha as 2nd Runner Up.

Re-Citation also had a fantastic musical and entertainment session which was lead by the energetic and sweet TM Rabindra Pradhan. He began this session by singing the melodious Nepali song “Malai Maaf Garideu”, which was followed by TM Kritisha singing “Bubbly” and TM Amit singing “You Make Me Feel.” As quoted by TM Rabindra “ Music is an immense part of any toastmasters competition” and this session proved that making our hearts float with the rhythm of the songs.

All toastmasters in Nepal came together on this pandemic scenario to make the event remarkable. Toastmaster is a place of positive aura, uniqueness, and diversity where each and every member strives for their own as well as others’ progress together, where teamwork and determination are the strengths, where participation is encouraged and everyone’s a winner. Re-Citation proved that for future events too, no matter what the situation, celebrations will be done with the same energy and enthusiasm as this one.