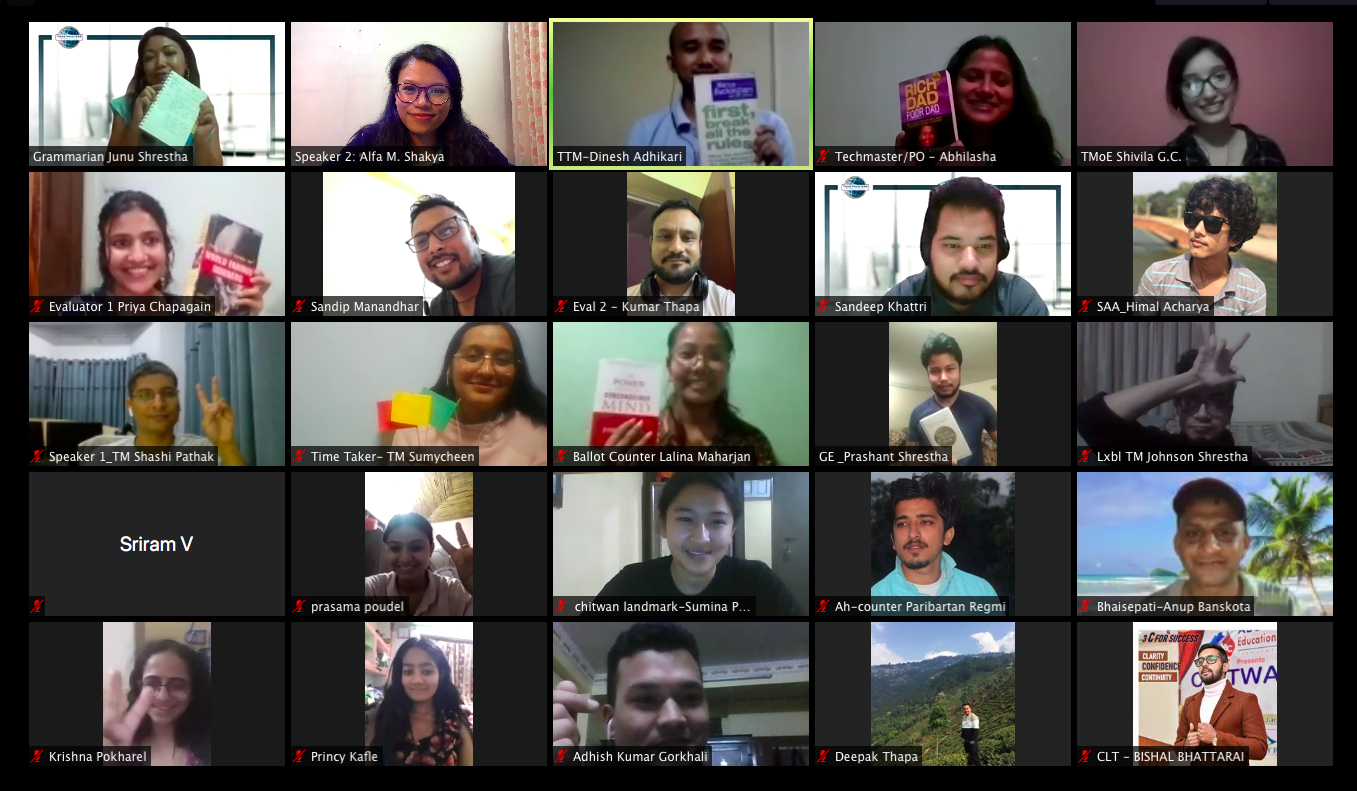 One day we received a message from TM Alfa Shakya: “Would your club like to have a joint meeting with us?” TM Alfa said, “KUSOM was once a new club and they can understand how difficult it is for new clubs, so they wanted to collaborate.” Her words seemed to be an angel’s word for us. In today’s world, people run away if we want a small help and here KU-SOM Toastmasters Club initiated for a joint meeting. When we decided to have the joint meeting it had been just a few days that our Club had been chartered. At that moment we did know even know how joint meetings are conducted, but as we all are here to learn, Chitwan Landmark Toastmasters became ready to make mistakes and learn from it.

On the one hand, we were excited because this was our first Joint meeting and on the other hand we were worried about whether we can give our best or not. The date was fixed for May 12, 2020. Our TMOE Shivila GC had chosen an interesting theme, “The Myth Of Icarus”. Flyers were made according to the theme and all role takers were decided.

The first session was the  FEATURED SPEECH session. There were two speakers, TM Shashi Pathak from Chitwan Landmark Toastmasters who was in his level 1 project 2 and the second speaker was TM Alfa Shakya who was on her level 5 project 2. TM Alfa was going to speak for 20 minutes that day according to Toastmasters International manual. TM  Shashi was evaluated by TM Priya Chapagain and TM Alfa Shakya was evaluated by TM Kumar Thapa.

The second session was Table Topics session which was lead by table topic master TM Dinesh Adhikari. The topics were so interesting that most of the audience came up to speak. And some of them even didn’t get the chance as he had only three topics.

The last session was the evaluation session where the direct and indirect evaluators presented their evaluation and made us believe that we make mistakes but there is a chance to improve.

In the end, the GE TM Prashant evaluated the entire meeting and gave some suggestions for improvement. After the final evaluation, it was time to announce the better-featured speaker, better Table Topics speaker, and better evaluator who were TM Alfa, Guest Vidhushi, and TM Priya respectively.

The members of KU-SOM Toastmasters were so charming that we didn’t feel it was a joint meeting, rather it felt like our regular meeting. We have heard about learning by doing and by conducting this joint meeting we learned a lot.