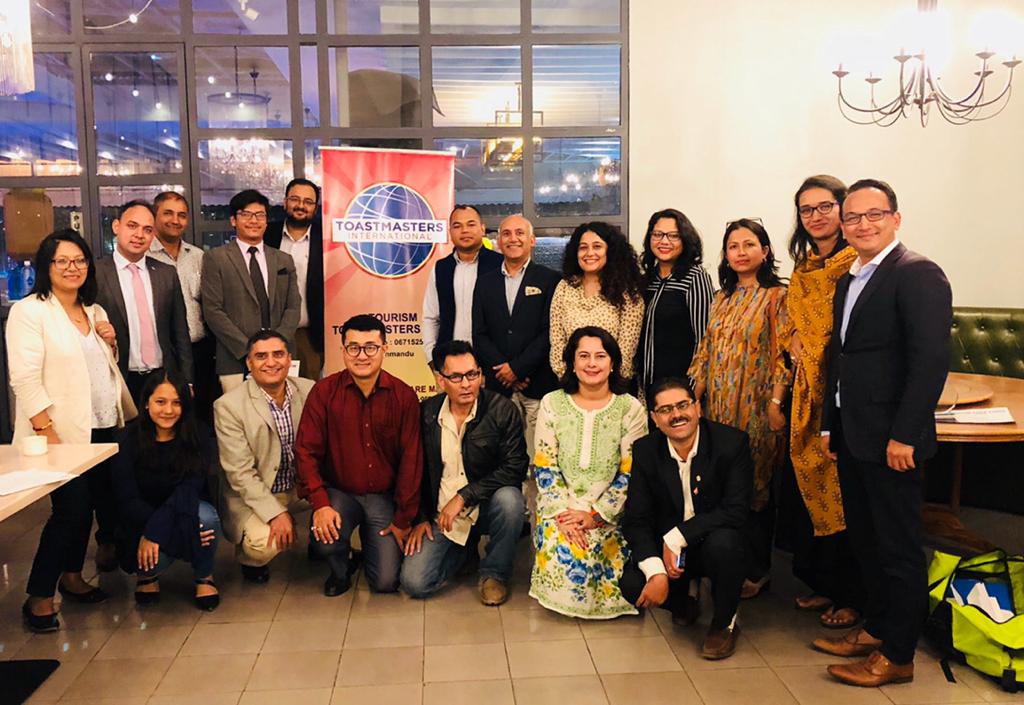 On New Year’s Eve I was in Namche Bazar, on the foothills of the top mountain of the world- Mount Everest. It was a beautiful beginning of the year and I thought the rest of the year was going to be very exciting and productive as well. Thus, I made several resolutions in the areas of health, career, and travel as well as Toastmasters, feeling certain that things would be really good.

Around February, we started hearing about COVID 19 in China and still felt immune as it was miles away. So, we were determined that it will not affect us and our plans! Uncertainty started hitting us slowly as we attended Toastmasters meeting with masks and moved from handshakes to Namaste.

Our then President, Mr. Manoj Basnet (fondly called Manny dai), reemphasized on the need to be connected, especially during these uncertain times, via Toastmasters. Situation got more complicated, our government announced total lockdown, and after two weeks of lockdown we decided to go for online meetings towards the new normal.

The wave of uncertainty hit us more as we were not sure how long the situation would last, and we were all doubtful if technology would be viable and sustainable for meetings like Toastmasters where precision is required. But we decided to start, and it was a steep learning curve for us all as we were teaching each other how to use camera angles correctly, learning to mute/unmute and create voting polls. All of these now seem like small tasks but in the beginning they were all very daunting.

Meetings started gaining momentum as it was not only the learning but the human urge to connect and be in the company of like-minded friends who supported and uplifted each other, which got more people joining these virtual meets. It was kind of a surreal and uplifting experience- something which I never would have thought was possible in a virtual meeting.

We were slowly getting used to this uncertainty, when a bigger and more personal loss hit us. On April 14, we were shocked to hear that our president, Manny dai, had a sudden heart attack and left us for the heavenly abode.

The whole Toastmasters’ community was in shock as we could not believe a person who was so physically fit, passionate and was such a lovely human being was gone in just a few minutes. This news rocked me at the core, as we had had a long chat about Tourism Toastmasters’ goals and plans of making the club better just three days before. That day, I felt that I had lost a small piece of my heart as I lost our dear leader, mentor, and friend. Our whole community was shocked and grieving as he has touched each of us with his unique style- be it his monkey slapping stories, his calmness, his poise as a leader or being a motivating mentor. He was the President who gelled the team together and inspired us to be better toastmasters.

It was the biggest uncertainty our club has ever faced till date as we lost our charismatic leader. While we were all grieving and feeling more uncertain, COVID-19 was spreading like wildfire around us, adding to this anxiety.

Our executive committee leadership was put to the test as we didn’t have the heart to accept the fact Manny dai was really gone. We didn’t have the courage nor the heart to continue our meetings without his humor, humbleness, poise and ease. But we all knew that the club was where Manny dai’s spirit lived and the only way to keep him alive and with us would be to make sure we as a club continued. We all decided to come together in these difficult times and make his dream come true, his dream of making this platform alive for Toastmasters.

As the Toastmasters International slogan goes: “Where Leaders are Made”, we realized that we were becoming better in dealing with uncertainty, something which is omnipresent in all our lives, by continuing to follow Toastmasters in our daily lives with even the smallest of efforts. I feel we, Tourism Toastmasters, have really lived up to this virtue by holding on and taking small steps even in the most uncertain of times.