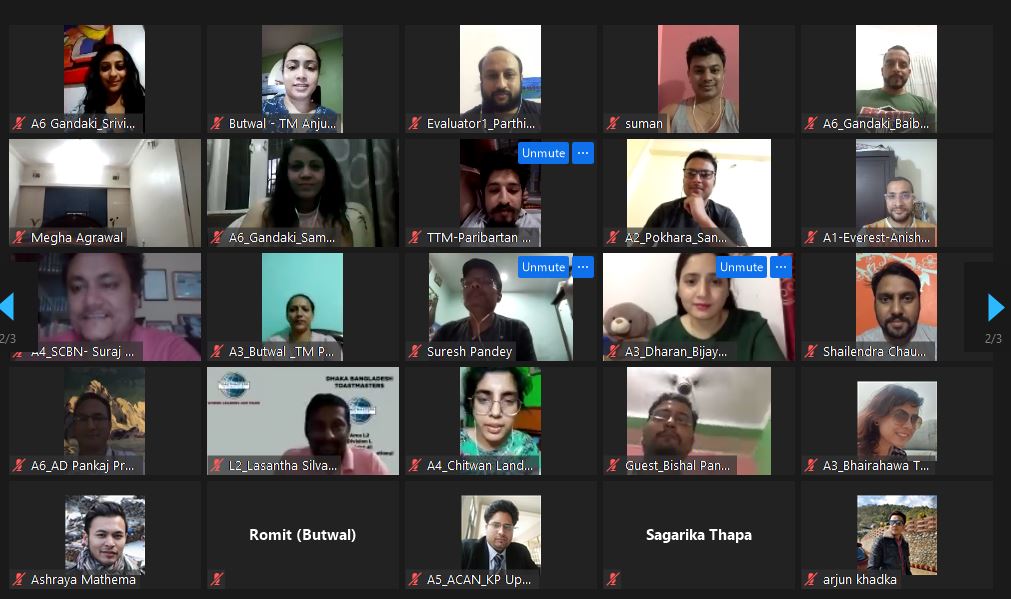 At the time when the whole world is dealing with COVID-19 pandemic, regular Toastmasters meetings were obviously not possible as we have to maintain social distancing to protect not only ourselves but others as well.  To resolve this, Toastmasters came up with a fantastic idea of using an online platform to meet up; however, it was not easy. Clubs were in dilemma; some clubs started online meeting reluctantly while others were in ‘wait and see’ to find if everything goes back to normal and then re-start the regular meetings. Amid this dilemma, TM Ankit Goenka, Area A3 Director, believed that the best way to getting things done is to simply begin, and a brainchild ‘Synchrony Six’ came into existence. Then, for the first time in the history of Nepal’s Toastmasters fraternity, six clubs outside Kathmandu planned to join hands and conduct a virtual meeting together, what a Synchrony: a simultaneous action!

Finally, the day arrived, on 1st June 2020, Pokhara, Dharan, Gandaki, Bhairahawa, Butwal, and Chitwan Landmark Toastmasters Clubs conducted the meeting which turned out to be not just a grand event but also set a benchmark for themselves. As Bill Bethel once said, ‘A successful team is a group of many hands and one mind,’ TM Ankit was the man behind the scene and success of the Synchrony Six who dreamed and made it happen along with immense support of all six clubs. This meeting has also set a good example with a message that teamwork and dedication are the essential ingredients to make a dream come true. As the name suggests, the meeting was perfectly synced and went on flawlessly. The meeting also received special blessings and recognitions from our Division A Director, Suman Shakya, DTM and District 41 CGD, Ranjit Acharya, DTM.

As the clock struck 5:00 pm, TM Sandhya Vanshisht called the meeting in order followed by a welcome note of Presiding Officer-1 TM Suyash Malla from Gandaki Toastmasters Club. Toastmaster of The Evening (TMoE) Dr. Pratikshya Khadka then took over the session and called Ranjit Acharya, DTM, and Suman Shakya, DTM respectively to address the members who mesmerized everyone with their motivational speeches on communication and leadership in our daily life. The meeting followed the standards set by Toastmasters International and adjourned at 7:00 pm with the closing remarks of Presiding Officer-2 TM Neha Agarwal from Butwal Toastmasters Club.

No doubt that the success of any Toastmasters meeting depends on the various role players and justification for their respective roles. An entire set of role takers from SAA to Ballot Counter played their role in such a way that it became the benchmark for the entire Toastmasters fraternity. Hard work, dedication, and zeal to learn were clearly visible in each role-player which led to the success of the Synchrony Six. The meeting ended with the commitment to continue this Synchrony at least once every year and the 1st of June is going to be dedicated to the joint meeting of all clubs outside Kathmandu valley. Hopefully, we can rename the meeting as “Synchrony Twelve” on 1st June 2021.